With the outbreak of the Korean War in 1950, many young men in the Apostolic Christian Church were drafted and sent to the Far East. Among them was Bro. Willis Ehnle, who spent his time working at a hospital in Japan, and passing out Bible literature in his free time. This led to contacts for further Christian work, regular meetings were set up, and eventually three churches were established: Shioda in 1956 (rebuilt in 2013), Tokyo in 1959 (rebuilt in 2001), and Tamahata in 1962 (has since merged with Shioda church). Church membership grew rapidly during the 50’s and 60’s. Today, two churches, one in Tokyo and one in Shioda (Yamanashi Prefecture) serve as the nucleus for spiritual nurturing and outreach.

Outreach work through the years has included English teaching, various Bible study groups, Sunday school activities, and a church kindergarten. The kindergarten at Shioda church ran from 1967 through 1992, and was served by faithful single sisters and brothers. 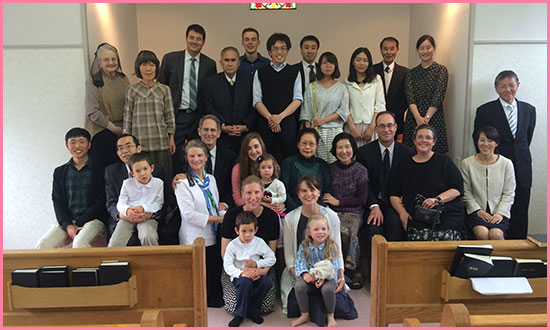